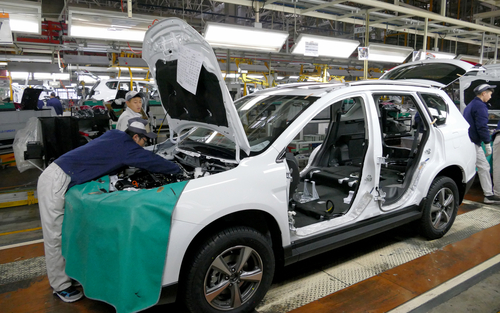 Ford Motor Co. (NYSE: F) announced on Tuesday plans to add 550 jobs to the Kentucky Truck Plant. The automaker will also transfer approximately 500 workers from its nearby Louisville assembly plant to help with production.

Ford is boosting production of its popular Ford Expedition and Lincoln Navigator by 20 percent this summer. Strong customer demand for both SUV’s is generating the increase in production. The move will be adding 550 new jobs at Fords Kentucky truck plant where it assembles the vehicles. While around 500 workers from neighboring Louisville plant will be transferred to help keep up with demand.

While Kentucky is expecting an influx of jobs, Ford plans to make cutbacks in other areas of operations. Internationally the automaker expects to eliminate nearly 5,000 jobs in Germany, and in an undefined number of jobs in the United Kingdom. U.S. salaried workers can expect cutbacks an undetermined number of cutbacks as well. The move stems from Ford’s USD 11 Billion plan to restructure its business and improve overall performance

Over the past 12 months Ford’s Shares have sank 23 percent, however, since the start of 2019 they have increased more than 12 percent. Shares closed at USD 8.57 a share on Monday and in before the bell on Tuesday the stock was up more than 2.5 percent.

“Kentucky Truck Plant is home to two of Ford and Lincoln’s most successful vehicles,” said John Savona, Ford vice president, North American manufacturing. “After seeing a continued increase in customer demand for Expedition and Navigator, we are boosting production for a second time to meet it.”